In years gone by, the arrival of a telegram could make the heart skip a beat or the stomach tighten. Was there terrible news of a son at war on foreign shores or a declaration of love from a suitor?

A derelict name board for the Bangalore Telegraph office lies on the ground outside the telecommunications office Photo: AFP

In India, it was the technological breakthrough that revolutionised communications across what was then the vast British Raj – expediting the East India Company’s total commercial dominance of the country, helping to suppress the 1857 uprising and providing newspaper readers in Britain with regular updates from the Empire.

However, after 163 years, the days of the telegram – or taar in Hindi – are coming to an end with the dawn of the age of text messages and emails reaching India’s rural poor for the first time.

More than 900,000 Indians now own mobile phones and 120 million people use the internet – figures that are expected to rocket in the coming years.

India is the last country in the world to use the telegram on such a large scale, but officials said the service, operated by the government-owned telecom giant BSNL, had run up losses of more than £2 billion and the government stated it was no longer willing to bear the cost for what had become “nostalgia”. 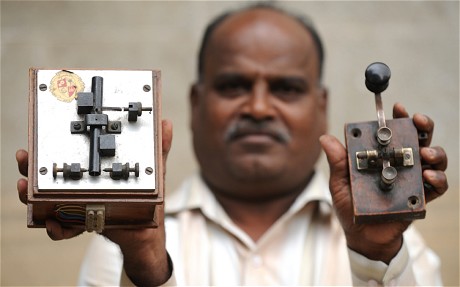 “Currently, we send only about 5,000 telegrams per day,” said a BSNL official. “That’s down from several hundred thousand a day before the advent of the fax machine.”

Over the past decade, several countries have phased out telegram services. In Britain, telegrams are operated by a private company, but are marketed as retro greeting cards or invitations. Centenarians still receive a telegram from the Queen on their birthday. In the US, the main service provided by Western Union was shut down in 2006. Services of varying scales are still provided in Russia, Germany and Canada among other countries.

The last telegram to be sent in India on July 15 will use similar technology as the first, which was successfully transmitted over the 13 and a half miles between Calcutta and Diamond Harbour – on the banks of the Hooghly river – in 1850.

Its use in India was pioneered by William O’Shaughnessy, a surgeon and inventor. While the world’s first ever telegram was sent by Samuel F.B. Morse in Washington DC in 1844, O’Shaughnessy was apparently unaware of Morse’s work and used a different code to send a message by transmitting electric signals over long distances.
Lord Dalhousie, the Governor of India, recognised the potential of telegrams and authorised O’Shaughnessy to build a 27-mile line near Calcutta.

By 1856, the network stretched 4000 miles across the British Raj, connecting the strategically vital cities of Calcutta, Agra, Bombay, Peshawar, and Madras.

The next year, the telegram helped the British violently subdue the Indian Rebellion 1857, with one captured Indian soldier, on his way to the gallows, reportedly pointing at the telegram device and stating: “There is the accursed string that strangles us.”

“The telegraph allowed the British to relay info across large parts of India in almost real time. This leap in communications proved decisive,” said BK Syngal, former chairman of VSNL, which had the mandate to send telegrams overseas till 2002.
In October 1947, Jawaharlal Nehru sent a telegram to the then British Prime Minister, Clement Attlee, surmising India’s views on Kashmir – in 163 words.

John Lienhard, from the University of Houston, writes: “Question nineteenth-century British colonialism if you will. There is much to question. But you can only admire O’Shaughnessy. He showed what one person can do by trusting the creative ability that’s there to claim. He stands as a reminder that one person can make a difference.”