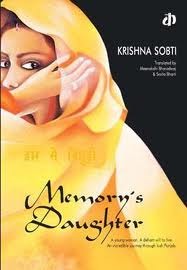 Reading this book both angered me and yet also made me feel heart broken at the plight of women in Indian society. Not much has changed from where she started. Women then and now are treated as mere cattle with value only for the womb that bears offspring, only to be pushed back into backdrop soon after. She has no identity for herself except daughter of, wife of , or even mother of. It is only in the 2oth century that women began to think for themselves and also carve a niche for themselves. But there is not much difference in the then and now. Atrocities at women still continue irrespective of where she comes from. The female species is still eyed upon as possession to be acquired as when desired by men. If she refuses then dominance and violence is used to overpower her submission.

Sobti’s Memory’s Daughter ( Daar se bichudi) is set in rural Punjab of the early 19th century. It is the story of a young woman named Pasho. It traces her life as she is sold and bought like cattle in a charged world of war among Afghan and the Anglo-Sikh of the 19th century Punjab. The female protagonist Pasho in the first few pages seems to be cast in the stereotypical mould of ideal Indian girl; and yet at times she rises to impresses with her strong will and courage. Despite being a victim of manifold oppression, physical abuse and violence, she handles the challenges of her life successfully and overcomes all difficulties.

In the novel, Pasho displays the tendency of every village girl, devoid of education, to accept the four walls of the household as her domain. She can be viewed as an out-and-out traditional woman who is completely ignorant of her rights as a human. She has no aspirations at all, other than bearing and rearing children for the family and feels content in performing the household chores. She rightly justifies the angel-in-the-house image of woman. As an orphan she is dependent on her maternal uncle for shelter. Thus her plight  from the traditional Indian mindset is that of finding a home. Without home, she is insecure, vulnerable and thus a cause of shame to the entire family. Therefore, once she has crossed the threshold of her maternal uncles’ house, circumstances keep on tossing her from one household to another and she has absolutely no clue as to what to do under the circumstances. Which only highlights the narrow minded societal set up where women are best kept inside the four walls of their homes.  And it is this insecurity that breeds within Pasho , binding her to the  threshold of her maternal uncles’ house, which she cannot cross, in spite of incessant abuses and thrashing. Finally, when she does that after sensing a potential danger to her life, she arrives at places which she considers her home, even though she is treated as a slave and at best a tool for deriving sexual pleasures. She does not run away from these places due to her fear of lack of shelter.

The journey of Pasho is the journey of every woman who fails to recognize her worth, and only measures herself with the capacity of her womb. In fact, she is no better than a female animal, a bhogya – a thing to be enjoyed and a toy to be played with by the male. Nevertheless, Pasho also displays a  “will to live”. This is a strong desire in her and this trait of her personality renders a touch of grit and liveliness to her personality. In spite of all hardships, she never loses heart or contemplates suicide. This physical beauty imparts a sense of arrogance to her character though outwardly she appears timid. This narcissism however becomes her greatest strength as she is able to get through all critical phases her life has in store for her amidst some happy moments. Had she not been in love with the self, she would not have been able to take so much suffering. Again a fact that needs to reiterated often to women to love themselves and to be in charge of their own lives. The protagonist emerges victorious even after being repeatedly sold and purchased like a cattle, played upon like a piano and treated like a servant.It is her desire to live even against heavy odds that becomes her forte.

So the reading of the book requires one to be ready to dive deep down into the rural India that existed before partition, and to see that women were marginalized and abused at free will of men. But Pasho can be seen as a strong, gritty character who despite her traditionalism, stands tall and she does display a sense of inner strength and personal courage. She may be seen in the women we meet on the streets who have no means of education and for whom living means to be totally dependent on their menfolk. They are at the mercy of the men they are married to or born to, to be used and disposed as and when they please.