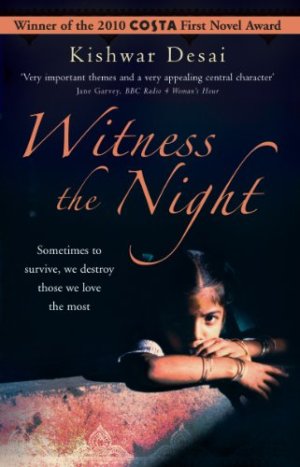 Female Infanticide is problem that troubles India since many years. It has deepened roots to such an extent that even education and literacy cannot mar the effects of this crime. Though secluded to some states now, it still poses a serious threat resulting in an imbalanced male-female sex ratio. Girls are killed right in the womb without a second thought. And the hands that perform this dreadful act is not necessarily male, females who themselves have wombs are party to this crime in the name of taking forwarding the lineage. I was drawn to this book because of the cover, which shows a girl half cowering with deep eyes that see to bore through you. So I immediately read the blurb as to see what it holds for me. I was captivated from the start: Durga. A fourteen-year-old girl, found all alone in a sprawling house in Punjab. Silent, terrified, and the sole suspect in the mass murder of thirteen members of her family.  Though hard to digest I was hooked to the story line to know what can drive someone to commit such a horrifying act.

Set in small town Jullundur (Jalandhar) in Punjab, the story is about a 14 year old girl Durga caught in a nightmare, accused of having murdered thirteen family members, and a 45-year-old social worker Simran who is working hard to find out the truth. The story opens with the diary entry of the girl that feels unvarnished, though a confused confession to a crime in which she was involved. The details of the crime are unclear and distorted, but it appears that the girl might have staged her own rape in order to make it look like “someone had tried to hurt me”.

Simran, a fiercely independent and outspoken social worker is given the task to speak with Durga and find out the truth from her. In course of time, Simran realizes that the incident is not as straight forward as it seems. Durga looks like a scared child but she keeps silent  about the incident and seems unemotional about the whole incident. It is up-to Simran to find out the truth on her own. As she tries to uncover the truth, she finds that the relationship of Durga with her family has sinister undertones to it. There are many skeletons in the closet which would be hard to unearth.

The narrative shifts between Durga’s diary entry and Simran. Durga, is sent to a remand home, as she is charged with the murder of 13 members of her family in one night. All of the victims had been poisoned, some had been stabbed and others burnt. Hard as it seems to comprehend how such a task can be done by a teenager, when the coils unwind you do understand the working of a tortured, unwanted and neglected girl child. Despite the lack of fingerprints and no evidence to suggest an outsider was involved, Simran is convinced there is more to the story than meets the eye. She wonders if a man was involved or whether Durga acted in self-defence. She feels that the only reason the case has attracted a blaze of publicity is because of the large inheritance involved. There are many instances of her having to pilot around the police to reach the actual conclusion. Its in many ways depiction of the law and order system that goes silent when blinded by money.

What follows is Simran’s painstaking investigation in which she immerses herself in the corrupted and vile Indian legal and judicial system in an attempt to unearth the truth. What she finds out along the way is often eye-opening. But it’s not until she is forced to confront an entire clan intent on eliminating unwanted females, often before they are born, that she begins to understand Durga’s dilemma.

The book is written from 2 viewpoints, Durga’s and Simran’s. While Durga’s writing is serious and dark , Simran’s is sarcastic and funny at times. Durga’s writing is reflective of the conservative, cloistered and shackled life she has led for 14 years. While Simran’s life shows the contrast in city life where even though a woman she leads life on her own terms and is fearless about it. By juxtaposing these two females, Desai shows the contrast in the existence of the two.

Though an easy read there were many issues I faced while reading. Firstly, I could not fathom the idea of a 14 year old girl murdering her family to avenge her unborn sisters and herself. Such a thought seems unrealistic no matter how many justifications are presented. Secondly the novel is riddled with continual exposition. Almost every chapter has something important to say about the plight of women, the trauma of having achild killed, ways foeticide is done, and so on. The author’s attempts to mould them into the plot is unsuccessful. They seem more like preachy monologues by the narrator than part of the narration. I do truly care about female infanticide, but would have preferred to discover the issues and decided what to think about them for myself rather than have them shoved down my throat, choking me, gasping for breath. I had almost put the book down if the desire to know the reason for the murder had not driven me on.

The opening chapter was shocking and held the promise of an intense mystery and drama, but the intensity evaporates by the climax. Motivations often seemed weak, and there were very few moments that pulled me out of my seat. The book marvels in parts where Desai describes how the girls where killed in earthen pots filled with milk(a cleanser in Hindu rites) or drugged to death, or worse buried alive in the fields behind the house. The incident with servant girls being bought as objects of pleasure to keep the boys tied to the house and not stray out. These give a depth to an otherwise rushed and hurried writing. The ending seems highly unacceptable after all that happens in the book. It seems that Desai after burning herself out of ideas haphazardly gave the ending . The book could have achieved greater heights if the writing and treatment to the sensitive topic was better handled.

“Most of them I knew were just waiting for a chance to avenge themselves on the world that had robbed them of the one thingy they would never enjoy again, their childhood.”

“The midwives used to take away newborn girls from their mothers, seal them in earthen pots and roll the pot around till the baby stopped crying. Or they would simply suffocate them. Or give them opium and then bury them. For a largely farming community, girls were a burden. A woman confessed to having had seven abortions in the hope of a boy.”

“Tired of the sound of the baby crying, she took some poisonous juice from the oleander flower, mixed it with castor oil, and forced it down the child’s throat. Eventually the crying stopped. The crying had bothered her more than the act of killing.”

” Carefully, Sharda took out a paper envelope from which she drew out a tiny white skeletal hand…This hand was buried in the vegetable plot….Cradling that hand still in my hand, like a precious flower, I gazed out at the innocent-looking field behind our house which…., I  imagined the claws tearing away the flesh from tiny bodies which never had a chance to cry out or draw their first breath……