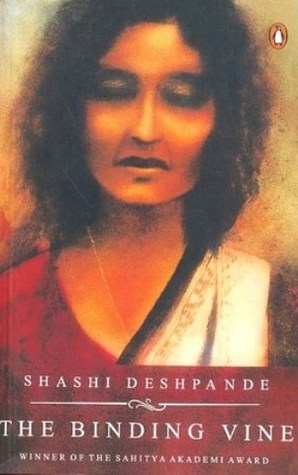 I am clueless how I happened to read this book. While looking for my next read, I was browsing through the bookshelf in the library. The book cover and the title held my attention. The lady in the cover especially had me captivated, and send mixed signals to my mind. On one hand, the lady seems sad and subservient, docile and acquiescent, yet something about her speaks strength as well. The title made me dive right in to find ‘ The Binding Vine‘.

Just like the title and cover made me think, after I finished reading the book, I was washed away with a flood of emotions that seemed to engulf me . I was drowned in the lives of the women the book spoke of, and many a times felt that I was standing in their place. The writing style of Shashi  is absolutely simple and natural. Yet it speaks volumes in a few pages without any effort. She manages to maintain a flow throughout the novel, slowly ‘binding’ her readers into the web of lives. She beautifully ties up all the subplots and has beautifully captured the issues faced by men and women under an oppressive patriarchal society. The novel does romanticize or glorify grief and pain, rather it is treated in a realistic manner wherein the writer manages to hit when tender. The hurt, the pain and agony of the character are real and when reading you are drawn to feel empathy.

Plot: This is a hard hitting novel about the issues that surround women in a male dominated/ patriarchal setup. The novel is triggered by the narration of the protagonist, Urmila and the women in her life, with whom her life gets entangled due to chance encounters. They come from various strata of the society which highlights that the general mindset of menfolk irrespective of the class remains the same. The women come together at various stages and happen to bind themselves together with Urmila.

Urmila is mourning the death of her beloved infant daughter Anu.Her mother constantly tries to take her out of this depression but she is not willing to come out of it, not yet. She wants to make sure this grief of hers stays alive and wants it to become a part of her life, just so that at any given situation she would never forget her baby, her Anu. But being caught in an unhappy marriage where her husband is away on the sea most of the times, Urmila finds it difficult to cope with this loss. She struggles to accept the reality, both relating to her marriage with Kishore and Anu’s death.

While battling with her grief, Urmila’s life crosses path with three women; Mira, her dead mother-in-law; Kalpana, a brutal rape survivor and her impoverished mother, Shakutai. As their story unfolds, so does their strength and courage blossoms.

Urmila gets pulled into the sad tale of a comatose Kalpana , who  had been raped brutally , but whose mother adamantly refuses to file a case because she has two more daughters to marry and she fears that the ‘daughters honor’ would be sabotaged and tarnished beyond repair. As the days progress Kalpana is forcibly shifted to another far away hospital much against her mother’s wish. This forces her mother  to revise her views and give a statement to a journalist of how her daughter was raped and how injustice had been meted out to her all along . The process to justice is quickened , but little did Shakutai know that she was opening a can of worms. With the statement to the press, she comes face-to-face with some ugly truths and revelations that topple her world . Through Shashi’s work we see a reflection of the society when it comes to rape and the way the family is treated. Woman must know fear. This line comes from Shakutai after her brief encounter with Urmila. She complains that her daughter invited the rape by grooming herself and drawing attention to herself when she should have tried to be invisible. Urmila protests knowing it to be a case of victim blaming. The daughter shouldn’t ideally have anything to fear; she argues and yet, but Urmi believes she was probably afraid, since she too feels the chill :

I know how fearfully I look back, my heart thudding in panic, when I hear footsteps behind me on a dark deserted street.

The victim-blaming isn’t limited to the mother. The people in the colony think that her behavior was ‘objectionable’ or that she was prostitute (because that would justify the rape!). Police registers it as a case of an accident because a rape case is too much trouble for everybody – police, doctors, family, victim etc. By the end , Shakutai sees light and in calm undertones tells Urmila that her Kalpana is “not at all like that . She is a nice girl” .

In between her grief and Kalpana’s case , Urmila unearths the sordid past of her long dead mother in law Mira. Urmila comes across Mira’s poetry, hand written notes, which spoke about her torturous arranged marriage to Kishore’s father and the life she desired. Mira was married off to a man who fell in love with her beauty at a social function. Her beauty leads her to become a victim of domestic violence and marital rape. Being a gifted writer she penned down beautiful poems, which years later capture Urmila’s attention who finds an escape in them. Urmila makes it her aim to get the poems published in the honor of the woman, who was forcefully made a wife and the mother. There are lines that speak for themselves for eg: These lines MIra pens when renamed as Nirmala . These four lines sum up the essence of what every young girl is taught the moment she is betrothed to a man .

A glittering ring gliding on the rice
Carefully traced a name ‘Nirmala’
Who is this? None but I,
My name hence, bestowed upon me .

Nirmala, they call, I stand satue-still.
Do you build the new without razing the old ?
A tablet of rice, a pencil of gold .
Can they make me Nirmala ? I am Mira

The women in the novel are weak, strong, submissive and independent. They are all bound by a vine called Urmila, nurturing it with love, concern, comfort and courage to each other. Each one of them has her own demons to fight and are trying best to deal with them. The author uses the themes of death, marriage, rape, loneliness, depression, patriarchy and loss to highlight the trials and tribulations of these women.

All the women have/had challenging marriages. They are lonely despite having (had) a life partner each. The question then arises Why is it so important for a woman to get married? When marriage is not a guarantee to happiness and security, why are women forced into the institution of marriage?

Rape is another violation of the self that brings the women closer. Mira and Kalpana both were victims, though a generation apart, one married and another unmarried. Yet it is the women who are blamed for their own horrific plight. They are blamed for bringing it upon themselves by being beautiful or drawing unwanted attention. Be it any generation of women, rape is a demon that still haunts them in the corner of their minds. Once married you are expected to give in to the demands of your husband willingly, even if your heart is unwilling. The husband can force himself on you, under the garb of marriage. So married or unmarried, the status holds no security from RAPE.

All the women are looking for their place in the patriarchal world. Being defined by her father or husband is not her only identity. She can be independent of them and make her own place if she manages to gather enough courage and likewise support. If a woman can bring a new life into the world, she definitely can take care of herself. It is only a matter of discovering herself and he own strengths. Urmila decides to publish Mira’s poems with the full knowledge that she will have to fight perosnal battles for them. While Shakutai decides to go public with Kalpana’s violator, thereby avenging the wrong done to her daughter.  This sense of being liberated from a cage, to get their voices heard and wings free from shackles, truly is their victory. The victory to fly with the winds, without the fear of chains or societal norms.