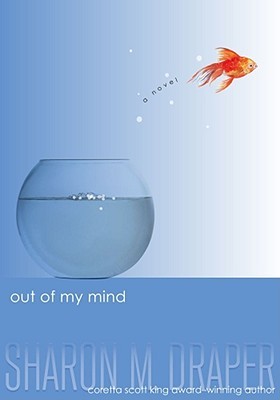 I had just finished R.J Palacio’s Wonder,and was looking for my next read. There were a lot of titles but this book cover drew me towards it. But I kept putting it down for some reason or the other. And when I finally managed to read, I was filled with mixed reactions. On one hand, I enjoyed and was wiping tears at the end, and on the other hand I was furious with Sharon for having given a very poor and despicable picture of educators. Maybe she had a a bad experience, but a collective let down of the community was not at all acceptable.

At some points the story has a lot of power and magnitude but the author fails to maintain the same towards the end.

Plot: Melody is a fifth-grade girl who was born with cerebral palsy. Her body is crippled and there is very little she can manage to do by herself. She can’t even talk. She can, however, think,  and she does it better than anyone else, thanks to her photographic memory. She is a hidden genius who is lost in the milieu of words swirling within the confines of her mind. Melody looks helpless to the people who’ve not known her well, but if value is measured in terms of mental capacity for future learning and retention, then Melody outshines virtually everyone she meets. She is, without exaggerating to say, a wonder.

But life is not easy or simple for a person with the challenges that cripple the otherwise happy life of Melody every single day. Other kids cannot really understand Melody or comprehend her level of intelligence. Since they see her as vulnerable and incapable of meeting even her own basic needs they fail to acknowledge that she can be as smart and even better than them. Their unwillingness or rather lack of awareness about her condition blinds them to how smart and how good Melody is in the ways that matter. Ultimately, its Melody who bears the brunt of this ignorance  by not having friends. So, Melody understands “unfair”. She knows “unfair” more intimately than most of us ever will.

The plot of this book rocks back and forth, giving glimpses of hope for Melody’s future and then extinguishing them. There are moments to laugh and then it’s followed by scenes that will move almost any reader to tears, both of happiness and grief. There isn’t a single paragraph of Melody’s story that doesn’t jump up from the page with life and vigor, filled with intense relevance to our own lives. Melody happens to sink in within us and we start to care about her without our own knowledge and we wishfully think about a happy ending which in her story is … impossible.

Now for the parts that had me seething in anger. The characters are uni dimensional and seem like cliches. You can almost predict what their next action would be. The girls in the book seem to be ones suffering from disabilities as they can’t look beyond their own nose. Their lives are centered around them, and anyone who is different is a misfit. They are openly mean and use words like retard, which in today’s scenario would land one in principals office. So is the author stuck in 80’s time warp or does she forget that she is writing in his century where most schools have inclusive education and children are more compassionate towards the special children. The educators are not trained to be with children with special abilities and get into awkward silences when they are around them. The teachers appointed to the group with special abilities seems fit for kindergarten and not them, since all they did was play audio books that they had been listening for quite some time. It irks that a writer in 21st century would give you such a picture. There is no mention of occupational therapist or special needs counselor.

The book for me was like opening a box of my favorite sweet Gems, where I find chocolates in every color coating, but then chocolates are naturally brown. Which is to say, that every reader will find something to carry in their hearts and yet be angry about her the story that could have been uplifting loses its tangent by ignoring facts of recent advances and changes in education sector.

One thought on “Out of my mind: Sharon Draper”