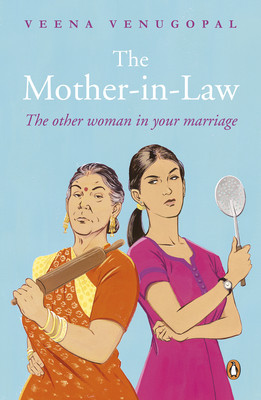 Duped, yes I was duped by the comic cover of the MIL with a rolling pin and the DIL with a skimmer. The title had me believe that this was going to be fun read about the squabble between Mother-in-laws and Daughter-in-laws. But the pages within contained stories or rather fictionalized version of someone’s reality that it took the air out of me. Each story had me asking the same question: How can women inflict torture on another of their own? Is the power ratio so imbalanced that women go to any extent to have an upper hand? While these thoughts were running in my mind I fell into thinking that even though we are fast progressing in the 21st century there are things that still throttle our growth at the roots. These are the rigid, conservative,monopolistic, chauvinist outlook that the society has for women in general. And it does not help that this mentality is watered into the men since childhood by their very own mothers. Mothers who instead of teaching sons to be kind and respectful towards women, teach them to be princes in their own little world where all their whims and fancies are to be met. The men grow up to be bigger babies with beards and moustaches who refuse to grow up. Their mothers smother them with love and any deed of theirs is considered right.

So when in this equation comes the daughter-in-law, she is eyed with suspicion and the MIL fears losing hold over her son and household. Harboring these insecurities she only sees the new girl as an enemy. The mil’s do their level best to create  wedge in the relation of husband and wife so that she is always between them, invisible yet whole. We have a plethora of saas-bahu saga, but the book brought forth a reality that was beyond  any of this.

The book contains fictionalized stories of real life happenings of women whom the author interviewed. To protect identity they’ve been renamed but the events are just as real. As the title suggests, the author went looking for some funny stories involving Mother-in-law, but came back with a bag full of stories of torture, manipulation, power politics, scheming and conniving women. Is this the imminent future we are providing our daughters?

There are eleven stories of eleven different women who share their stories about their MIL. There is Rachna who falls in love with her MIL before her husband only to realise that she was driving her life in ever aspect. Then we have Carla who belongs to Australia and who has a MIL who is unwilling to accept her owing to her ‘white skin’ and her notions of how Western women are. Payal weds into a joint family and struggles through enough but catches grip of the situation and fights for a separate kitchen and peaceful dwelling. Keisha, an Anglo-Indian girl is raped by her extremely conservative husband in the very presence of her MIL almost every night, and who enjoys sadistic pleasure in being audience to the torture. Then there is Arti, a successful journalist who is not allowed to sit on the couch in her marital home, which is seen as insult to the real members namely her in-laws, Deepa, whose mother-in-law called her a prostitute only because she was working. Similarly, there are stories of Anshika, Seema, Supriya, Nikita and Arti. There’s also Lalitha who speaks about her mother in law and her daughter in law Michelle who tells about Lalitha.

Reading this book feels like a hot gossip session with your girlfriends whewr you bitch about your respective MIL’s. But the only difference being that the gossip is no fun rather harrowing and traumatic tales of insults, taunts, tortures, rape and sadism. A girl is not a commodity to be bartered off as a commodity or chattel, nor is she a machine to work without break. She is just as much human as the rest of you.

This is a well researched and honest book, which will be an eye opener to both men and women. It goes to show how the silent act of husbands and Father in laws prove to be perilous for the daughter in laws and wives. The lack to strike a balance or toe the line for the MIL and DIL causes damage that sometimes cannot be healed.

Striking a slightly comic relief to the otherwise dry and depressing mood, Veena list Do’s and Don’ts for Indian marriage and also Ten ways to survive the Mother-in Law- after conclusion. Go on and read to know what your future can be or seek solace that there are others like you.

“In India, modernity is like a new outfit, you wear it only when you go out.”

“There is no fashion police stricter than the Indian mother-in-law.”

“Indian mothers do have an obsessive love for their sons. The whole notion of preference for the boy child feeds into this obsession.”

“Certainly, whom you marry on that day determines how you live the rest of your life. So forget about what you’ll wear and how you’ll have your hair done, focus on finding a man who has your back.”

“In many of the stories, husbands who don’t stand up for their wives often end up destroying their marriages.”

“You all talk about family values all the time. I am not sure what the family value is when a pair of pants is more important than wishing your family members well,” .