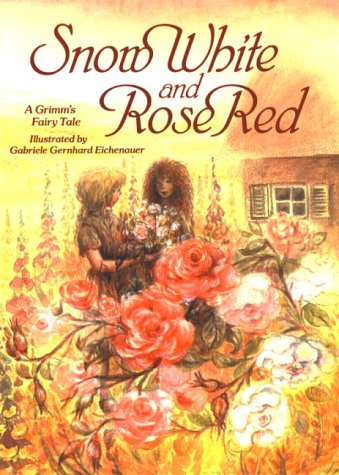 Plot: An old widow had two daughters named Snow White and Rose Red. Both the sisters had completely contrasting personalities. Snow White was shy and gentle, whereas Rose Red was outgoing and gregarious. One day the two sisters and their mother let a big bear come to their house to get warm because outside winter was too bitter. The bear would arrive each evening and spent the nights at their home. When spring approached the bear waved departure to them to take care of his treasure. In the meanwhile The two sister meanwhile meet a parsimonious dwarf. They help him several times but the dwarf does not thank the girls for the help. One day after they’ve helped the dwarf they come upon him when he is resting. They find the dwarf’s treasure, and he gets annoyed with them. At that moment, the big bear appears and kills the dwarf . The two girls are grateful to see the bear, but the animal suddenly loses his fur and transforms into a beautiful young prince. Snow white marries the prince and Rose Red marries his brother. They live happily with their mother at the castle.

I clearly remember the cover page where two girls one dressed in red and other one in white are pruning rose plants with red and white roses. Unlike other Brother Grimms stories this tale is more sane than other stories. It is not a prequel to the Snow white story we are all familiar with. This is a totally different story of two sisters.

If seen from the POV of small children then this book puts forth the message that good things happen to good people, treat everyone with kindness and respect, even animals. The sisters help the bear and the dwarf without any motive or with the intent to get something back in return. They help selflessly and hence are rewarded in the end.

But the adult me is agitated and disconcerted when I re read it. For example, if you read,

You can clearly see that female characters are set in stereotypes. Most fairy-tales (and to some extent their Disney adaptations) edify girls as passive, subservient beings who bend themselves to serve others, most prominently men are moral, upright and virtuous girl. This thought has taken seeds in unsuspecting young minds and has shaped into many a young girl’s dream: to be a little princess whisked away by a prince. In other words, a docile and homely girl who knows how to be of service to her patriarchal keeper, father at first, till it’s time to bid adieu to her parental house and then their husbands.

This fairy tale is no different, regrettably. The girls are set in typecast for their looks(fair, rosy cheeked, coy smiles, glossy hair), behaviour(submissive, good cooks, excellent in housekeeping).There is redundant objectification of girls picking flowers, singing songs, flitting their dresses and catching butterflies waiting for Prince Charming to take them away.
As an adult I do not enjoy stories which begins with a females who excels in wifely duties, is prim and proper and can keep the hearth warm so to say. Its rather regressive to have these tales where the girls marry boys/princes whom they’ve just met or rather just sighted. Children today do not need lessons like that, they are just not appropriate to this century. We need stories where characters irrespective of gender are able to strive on their own and meet ends. No more of damsel in distress, we need queens who can carry their crowns with head held high. Not necessarily with a king in tow always to make them feel lady like. I cannot suppose that the authors would possess a 21st century position from a conventional folktale written down in way back in the 17th century.

So the two rating, is for the difference in outlook at different ages. Thankfully my daughter too only enjoys fairy tales as one time reads and does not think much of them. I’d rather give Aesop fables if I had to teach her virtues.