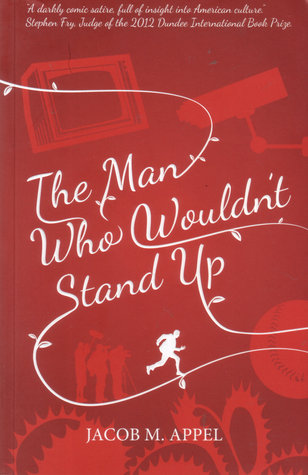 This book is a great satire of how most Americans found their lives changed post 9/11.The book makes some incredible points regarding patriotism, mob mentality, the media, its desire to overkill for increased TRPs and sensationalism. I loved that this book managed to be a fun and interesting read while still raising some serious questions about our society and the intricate thought process of the society as a whole that seems to enmesh people rather than deliver them. Humans are social animals with the power to think for themselves, but how often is the thinking faculty put to use??It speaks of how we are expected to be always in check and use politically correct terms and be in adjunct with the government at all times. Since anything different is considered threat to the sentiments of the nation and patriotic feeling. Patriotism is no longer an individual/personal feeling, rather it’s become
a collective communal feeling and anyone who does not abide or feel alike is labelled a traitor and lives the threat of being ostracized.

Blurb: Arnold Brinkman is a shy and retiring botanist; he loves his plants more than his country. But when his refusal to stand for the national anthem at a baseball game causes a major media incident, he is thrown into a world of pushy patriots, preachers, and press. And it’s not going to get any easier when he refuses to apologize. (from the book cover)

Things go down the drain as the matter gets escalated and Arnold is accused of being unpatriotic and harboring hatred against his own country. His house is surrounded by the press, police and a religious extremist, the Reverend Spotty Spitford, who are hell bent in making Arnold  apologize. The matter could have been solved and peace would have been restored, if Arnold had apologized, but instead, Arnold refuses to do so. The situation takes a malicious turn and goes absolutely out of control thereafter. Arnold’s beautiful garden is defaced and sabotaged, and he believes it to be done by Spitford. So he goes to Reverend Spitford’s church and insults him with a racial expletives, breaking a window from the church with a bible handed by Spitford himself to teach lessons him some biblical virtues. But things do not go well. Arnold is labelled as a wanted terrorist, and must hide from society. There’s a possibility he may be imprisoned for various acts: vandalism, racial threats, terrorism, etc.

There on Arnold faces a lot of privation and is on the verge of losing his sanity. The hardships, deprivation and adversities he faces makes him vulnerable and he almost ends up having an affair with the reporter who first met his after his rise to fame. Later he also meets another wanted criminal with whom he forges a friendship for a while, only to be dumped by the latter when Arnold goes against the words of the criminal. The incidents mentioned where he goes into hiding and isolation is not only horrific but revolting also.

The book is written from third person point of view of Arnold. It is filled with discerning insightful dialogues between character that not only shapes them but also leads the plot forward. Through the conversations in the book Appel exposes the distressing state of America, and the world as well. The media with its hunt for sensational stories and need to have 15 minutes of fame, has made a farce of being a patriot. It is like a circus ring where the ring leader makes all animals perform. Similarly the media dictates how society reacts, most of the times in a numb induced state.

The story many times reminded me of one of the plays I had read in my graduate years(literature) Waiting for Godot by Samuel Beckett. Appel has managed to create a story which is similarly absurd. But readers would enjoy the book and would be drawn to the plot is because it seems so believable. This book is definitely not everyone’s cup of tea since many scenes and dialogues might  wrench your guts forcing bile to your mouth. I think only a certain type of readers would enjoy the varied amalgamation of farce, wit, satire, irony, humour and the slightly ostentatious aura of the protagonist that make up this story. I would recommend it to those who enjoy sarcasm, cynicism at its best and have a politically incorrect sense of humor.