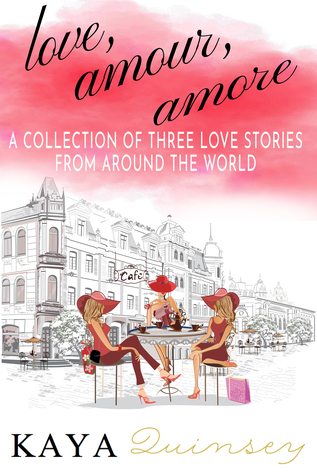 I received this book as a member giveaway from LibraryThing. From page one I was completely engaged with the words. Kaya’s writing style is simple and yet she manages to capture your heart in her own subtle ways. Love, Amour, Amore, is not just a collection of love stories, it is also contains within its pages the journey of three women to realize their own worth and not surrender themselves to something/someone below them.

The first story in the collection is Valentine in Venice. A rather fascinating title which gives away nothing about the story. I thought it must be something to do with Valentine’s day. Valentine in Venice is about a woman Valentine’s second attempt at happiness and contentment after her life slips down the gutter. Now twenty six, divorced and cautious, and having learned a hard lesson about relationships after her divorce. She realizes that she should be more aware and conscious about the choices that she had made in her life, rather than making impulsive jumps. Ten years ago, she had met Lorenzo when she went to Venice on a class trip. What followed was a whirlwind teenage romance, first love and first kiss. So desiring a break from her hectic schedule as a celebrated wedding photographer, she retraces her steps to her past and makes a trip to Venice. She expects the trip to be uncomplicated, easy, and undisturbed walk down the memory lane. Bu things never go as planned now do they? On the first day in Venice her destiny plays the game changer and she literally falls into the arms of her first love, Lorenzo. Their love is rekindled. With Valentine’s Day just  around the corner, will Valentine be another mistake in impulse or will it be her happily ever after?

The author here leaves it open ended, with the readers feeling cheated, as I felt. I was disappointed that the story didn’t carry on for a few more pages. The romance and the whole ambience had me held captive. The romance is not steamy but one that makes you smile and fills you with a warmth inside. Except for the deadly cliff-hanger ending it’s a perfect read for anyone looking for a sweet romantic short story.

The second story was A Coastal Christmas. This was definitely a page turner and like her first story was again open ended. It s story set against the back drop of Christmas. Jessica Beaton is a successful broadcaster in Manhattan, NY. She has it all the works for her:

the perfect New York City apartment, high-flying career, and a handsome boyfriend. Jessica is expecting a proposal from her boyfriend before Christmas. But she is humiliated when her co-host and boyfriend, Brett Fanshaw, almost proposes to her on-air before backing out, leaving her dumped and embarrassed on national television. Heartbroken and feeling forlorn she leaves NY to go home to Pebble Shores for the holidays for the first time in many years. While at home she volunteers to help her parents for the Christmas Carnival. She crosses roads with Dean Adams, the mayor of Pebble Shores. Still re-evaluating her life and the priorities she gets stuck in media frenzy when photographers click her pictures while she is home. Dean isn’t thrilled to have the media spotlight shed on their small town. What follows needs to be read. Does she fall for Dean or does Brett come after her?

The story is fast paced and there is never a dull moment. A story with the Christmas flavour that leaves you feeling content and in festivity mood.

The third story, Paris Mends Broken Hearts made me cry and also had me smiling with indulgence. I felt that unlike the other two stories, the element was romance was only in the mentioning and this was more about the three women getting together and working out their lives together.
Gwendoline Delacroix is a war widow who has lost her loving husband, Jean, in WWII. She feels haunted by the memories she shared with her husband in her French countryside chateau. She has dedicated staff that do their best to keep her afloat, but it’s not enough. Gwendoline takes off to Paris and meets her brother who takes her with him the Hotel de la Belle Paix – the hotel run by her brother and sister-in-law in the Latin Quarter in Paris. Over the summers she helps her brother and sister in law with small works at the hotel. She later lands a job at an animal sanctuary run by an eccentric aristocrat, Madame Goulet, who is a friend of Yvette, her sister in law. Her life makes quick turn from there. She makes new friends and proves to herself and everyone else that there is life after lost love.

This story collection is special because unlike common notion of a heroine(damsels) in romantic stories, the women are all strong, independent, determined, hard working and know their mind. Its a story of self discover as well. If looking for a quick read do pick this up. It will leave you feeling all relaxed and snug.