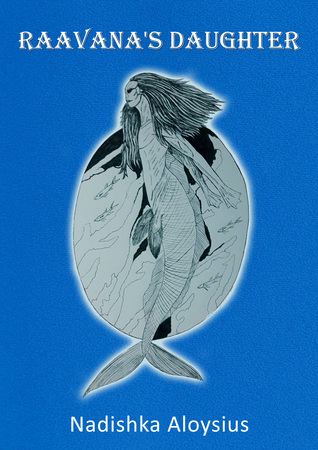 I received this book as part of LibraryThing Member Giveaway. Of late, I have been surrounded by books on mythological fiction. I must admit, I have enjoyed them a lot. My reading has exposed me to characters and events that I have never known. The finer nuances of many characters that I came across made me rethink about them. I have been reading mostly mythological fiction based on characters from Ramayana. Having covered Sita, Mandodari, Meenakshi(Surpanakha), Urmila, Karna’s wife, Kaikeyi, the list goes on. So when I came across the title of the book, I was instantaneously hooked. It caught my imagination as to what would be the story behind Raavana’s Daughter.

The author renders her version of Ramakien, the Thai version of the Hindu epic. I had expected this to be a fully fledged novel, but was disappointed to see that it’s a quick dip, a short novel. The story begins with Hanuman pondering over his decision to help Ram. Unlike Ramayana, Hanuman here is not fully supportive of Ram’s quest. Hanuman sees the disaster in the wake of the war and wishes not to be a part of it. But it’s his respect and devotion for Ram that brings him to assist Ram and bring back Sita. Hanuman is assisted by the vanara army headed by him along with Nala and Neela. tHe other two leader are sceptical about building a bridge from Pamban island to Lanka. They perceive that it would cost a lot of destruction to natural resources.

Deep in thoughts, Hanuman sees a dream where he gets the solution. Soon the army is building the bridge and manages to complete it by sunset. But at dawn they find it ruined and in pieces. They again set to work but yet again the bridge is damaged. Hanuman sees the hand of some magical powers and keep watch. He comes across Suvaana, the Mer-queen and daughter of Ravana. The story further contains the meeting between the two and how Hanuman manages to draw her towards the good cause. But can she be trusted? Will the power of goodness break the pull of blood ties? Is she ensnaring them into further trouble or is she really helping? Will Hanuman fall for her charms?None of these questions meet an answer as the author gives a rushed ending which is open ended. A lot can happen and readers are free to decide what happened.

After the whole build up I was very disheartened by the cliff-hanger ending. It is well written and seems like a chapter books we read in our language arts text books. It contains just enough story and plot to allure the reader with its magnetism, but doesn’t actually give you the full story. There is a lot of scope for much character development or an ending. An excellent read for readers who are looking for a slice of mythology within a sliver of time. This makes for a marvellous quick read. So just bite right in.