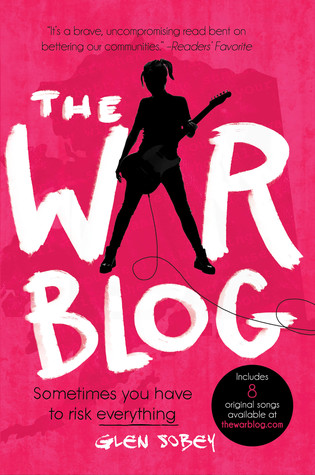 I received this ebook as part of LibraryThing Early Reviewers copy. I thank the author and publisher for providing me the copy. This is an honest review and my views are not biased or altered by receiving a copy.

The premise of the story is rather promising and the blurb pulled me towards it. Not every day do we have someone writing about the Rape Culture prevalent in our society, or even how the culture has permeated in to the very fabric of our society.

Blurb: Crystal Rose, a 17-year-old high school junior, and her younger brother were abandoned by their drug-addicted mother fifteen years ago in an Alaskan Native village, an event which Crystal resented for years. However, when she learns that her mother was raped in high school, Crystal declares war against a society which reduces girls to their looks, forcing them to feel worthless without the approval of guys. While living in a small Alaskan town, she starts The War Blog website, along with her best friend and crush Kato—a brilliant Native boy—attacking everything promoting female objectification and offering ways to fight back, all supplemented by her original songs. Crystal rises from nothing in the wilds of Alaska to become a champion for change, risking her life against men who would force her to keep silent. She faces her parents’ abusive past and fights for a better world.

When I finished reading the book I was filled with mixed reactions; sadness, angst, disgust and yet it felt apt for current times. I applaud the author for taking up the writing of such a intense and deeply distressing topic. The story will definitely touch chords with readers if they sit down and let each incident filter through them. This is a highly sensitive story which will make you feel disgusted, sickening, revolted; yet you will nod your head at the poignant truth that is at the surface of the story. Sobey has taken the task of writing about an issue that is not only rampant but also needs immediate attention. The topic of rape is dealt head on and the author does not try to mitigate or try to take the edge off the matter. The story is from the POV of a 17 year old teenager, who finds life serving her cards unexpectedly. Before she has dealt with one, another card is thrown at other almost knocking her down. But she perseveres, and it’s her steely determination that is heart warming and gratifying. It also brings forth an important fact that if a child knows that he/she has a family to fall back on in times crisis, they grow to be strong individuals. Besides, the main topic of Rape Culture, the book also tries to bring into the open the issues of depression, alcoholism, sexual abuse, substance abuse, body shaming, obsession about body size, cyber bullying, ill effects of social media, same sex relationship and the associated taboo and the increasingly disheartening trend of objectification of women.

The author does try to moderate the harshness of the topic by the love and tenderness between the characters as well as the highly lyrical and poetic songs written alongside the main plot . The author has done an excellent job of highlighting the often feelings of  hollowness and insignificance the younger generation often experience since they feel themselves tied by the shackles of cultural norms and being criticised by how they look and whether or not they “fit in”. There are many twists and turns to the plot which would keep the readers captivated.

But I do have certain objections about the book. Though the book openly condemns body shaming and the objectification of women, there is careless use of words like ‘slut’, ‘whore’; and the ever too often mention about breast and the size. The delicate matter of gay relationship should have been dealt better, because Crystal’s idea that half brothers can be in a relationship simply because they cannot have kids seemed like mocking the whole matter. Then there this concern that every girl Crystal meets has been sexually assaulted or raped. And those who have been raped take to drugs and fall down to the pits of darkness, accepting the scums or engaging in  wanton ways since they think they don’t deserve better. This track in the book is highly disturbing and made reading difficult. These girls didn’t take their lives into their own hands rather put up the excuse of rape to their behaviour. I did not like the other girls mentioned since they seemed to have accepted that there is no life after being raped. And the author too fails to provide details that were they drug addicts earlier or was it after they were raped. The only saving grace is Crystal who stands firm to not adhere to the images society has created about women. But being a teenager she does feel the moments of insecurity with herself and her body, but makes sure not to delve too much on them.

The book needs editing to do away with the entrances and exits of characters which are way too many. It made me turn pages to check upon who was who and their story, rather annoying. It made the reading suffer at times. But as whole the book shows potential and would make a brilliant book for every teenager suffering with body image issues and sexual abuse. The book asks girls to have bigger aspirations and targets for life than worrying about external manifestations. The songs in the book are apt and make a wonderful addition to the story.

Recommended for all but do not mistake the character with the author. Feminists would not like the book. But if read from perspective of a teenager you would enjoy more.