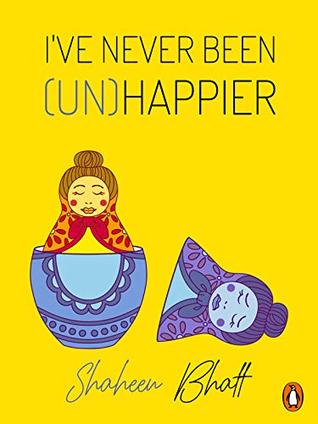 Names can be so misleading, especially if the name has a famous surname. I would have missed out on a fabulous book if I had let go of this book just because Shaheen is Mahesh Bhatt’s daughter and Alia and Pooja Bhatt’s sister. Like I did the mistake with Shweta Bachhan’s “Paradise Towers”. Coming from the lineage of acclaimed writers like Harivansh Rai Bachhan and her own father Amitabh Bachhan who has a flair for words and writes lyrical poems. Shweta’s novel fell short of every expectation I had from her debut. So I was skeptical about reading Shaheen’s book. The topic she wrote about is one that most people try to keep under wraps. It’s only recently that the topic of Depression had been openly addressed. Depression is not a recent discovery, but its open addressal is. Deepika Padukone opened up about her fight against depression, and how much she struggled to be able to talk about it. It is easily brushed under the mat as a mood disorder, but the truth is far from that.

As a person who has experienced lows in life more than the highs, I too have battled depression and struggled to keep up the mask of sanity and happiness for the sake of people around me. Everyone took it to be sadness not completely comprehending the depth of my pain. Reading Shaheen’s book was like revisiting those lanes again.

I’ve never been unhappier is an intense read about Shaheen Bhatt’s rendezvous with depression. Little is known about Shaheen, except that she is Mahesh Bhatt and actress Soni Razdan’s elder daughter, sister to Alia Bhatt and half-sister to Pooja and Rahul Bhatt, children of Mahesh Bhatt from his first marriage.  Though she hails from a distinguished family with well-known faces in the industry, and comfortable life, she has battled the demons of depression since childhood though not identified then. This book is like her journey through life where she recounts her emotions and experiences she encountered while facing depression.  She does so with full honesty and is blunt about it.

The incidents mentioned in the book would make you squirm. From being asked to leave the sets while being photographed with her sisters to nonexistent celebrity life.   She is a misfit in her family with no good looks or exceptional talent under her belt.  She first experience the voices inside her head at the age of 15. From then on she battles the demons alone without realizing what she was undergoing. The oscillates between the desire to live and to die, the latter being more promising since it would end her invisible life.

The finest part of the book are her interactions with her father (Mahesh Bhatt). A man of words, it is not surprising to read that he offered her no sympathy but was rather accepting and helped her faced the dark side. He is not condescending or dismissive, rather he offers her advice that is sensible and sagacious.  Sylvia Plath’s quotes in the book add to the ambience of loneliness and seclusion which Shaheen experiences.

At first glance it might seem like a quick read with only 66 pages. But when you sit to read it hits you in the gut. Depression is not just a complex but a multifaceted ailment. It strikes silently and leaves the victim helpless and vulnerable. It is not something that can be comprehended without experience, its effects cannot be measured from outside. By sharing her experiences, Shaheen has embraced all those who have seen the pitch darkness of depression and battled against suicidal thoughts. It must be remembered that it can be done only when supported by family members and friends, to pull you out of the abyss.

This book is a must-read for those who have not been brushed by depression. It  will help understand those who live this reality every single moment.  And those who live with it or have won against it , remember you are not alone. It’s not a medical document, but a sincere personal retelling of the horror of living with depression, and how its victim suffers like a fish out of water.